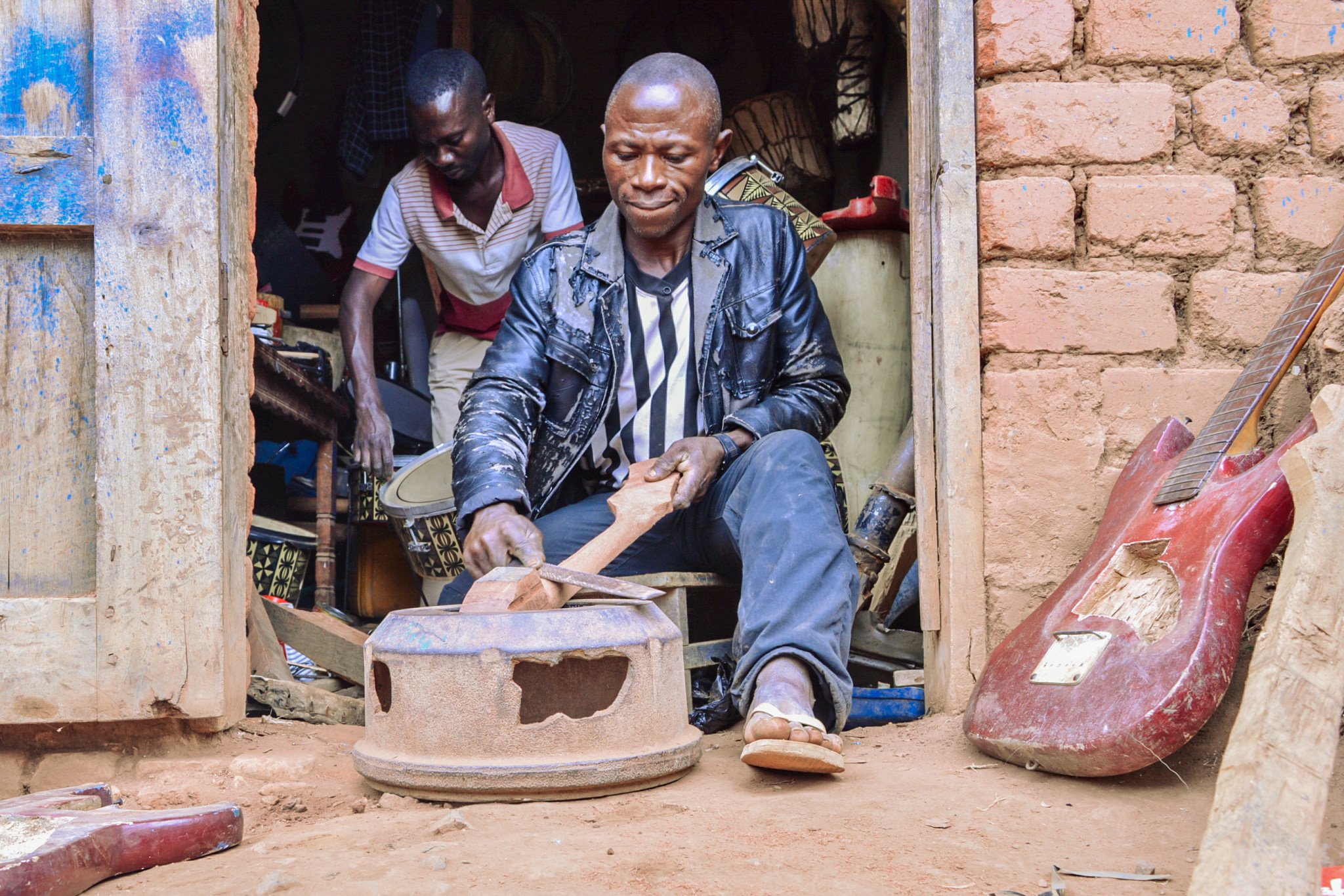 LUBERO, DEMOCRATIC REPUBLIC OF CONGO — Moïse Muhindo Kisuba sits on the floor of his workshop, chiseling the neck of a guitar. An apprentice watches. On the walls, modern drums and guitars hang on display.

Kisuba knows his instruments. He will answer customers’ questions without hesitation. To demonstrate a guitar, he might strum a favorite gospel piece and sing in Kinande, his mother tongue, thanking God for the gift of intelligence. He often bobs his head to the rhythm of the music.

Kisuba’s workshop is small, located in south Lubero territory, one of the most remote parts of eastern DRC. It lacks the machinery of a big workshop, and all its instruments are handmade. It has only served a few hundred customers since its establishment in 2018, but in this region, it’s transformative.

One piece at a time, Kisuba’s workshop not only equips young people — often underemployed and prone to political manipulation — with practical skills but also gives local musicians access to instruments, so their music can offer respite from crisis. In this part of DRC, a resurgence of fighting has left thousands dead or displaced. More than 130 armed groups in the provinces of North and South Kivu are battling over a complex array of issues — including land and natural resources, according to the Kivu Security Tracker, a project between Human Rights Watch, an international nongovernmental organization, and New York University.

Moïse Muhindo Kisuba sings a song at his workshop in south Lubero territory.

Kisuba, 49, began his trade in 2012 but only knew how to make traditional instruments such as tam-tams, guitars and flutes. This changed after an evangelical trip to the city of Bukavu, in South Kivu province, in 2018 with his gospel choir. A workshop for modern instruments, the first he’d seen, piqued his interest. “The three days I spent in this [workshop] were enough for my training,” he says.

Before Kisuba opened his shop, musicians from south Lubero had to travel outside the region to purchase modern instruments or import them from neighboring countries like Tanzania. Most of these instruments were costly and inaccessible, Kisuba says.

To keep his instruments affordable, he sources materials from Butembo, a commercial city in North Kivu province. A complete set of drums costs about 480,000 Congolese francs ($240) at his workshop. An imported set costs almost double that amount, which most local musicians don’t have, Kisuba says.

“They order, pay cash or debt,” he says. “I can make two drums and eight to 10 guitars per month.” 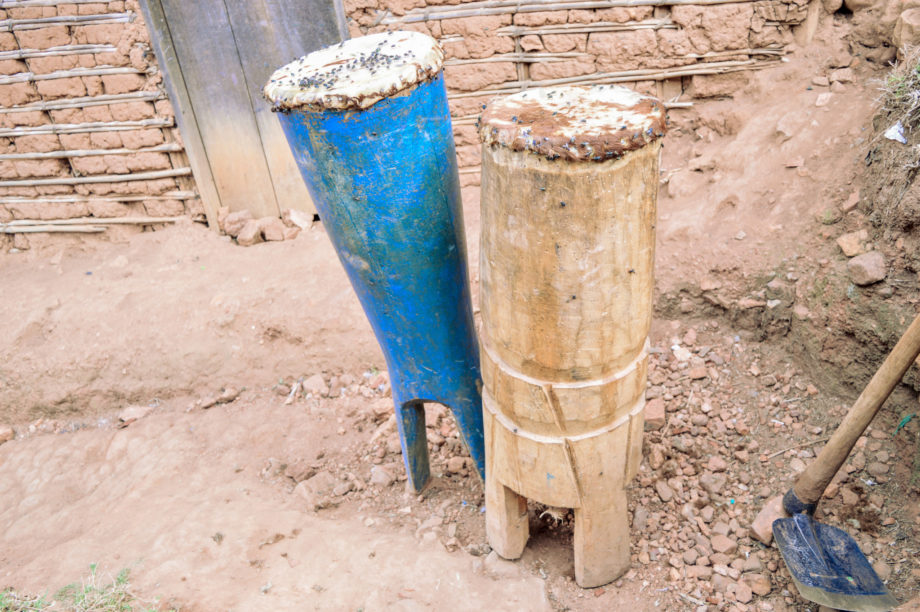 Moïse Muhindo Kisuba made traditional drums before he started building other instruments.

Moïse Muhindo Kisuba demonstrates the types of drums to his student at the workshop.

Better access to instruments has sparked an enthusiasm for music in south Lubero. Ringo Ramazani Muhinho, a member of Jeux Du Ciel, a Kirumba-based band, says they couldn’t afford guitars. He approached Kisuba, who agreed to a payment plan. Now, Muhinho plays rumba. The genre, full of rhythmic beats and danced to across DRC, promotes “social cohesion and solidarity,” according to the United Nations Educational, Scientific and Cultural Organization.

Kisuba’s instruments also have helped make Muhindo Ngoyamwaka Samuel’s activism possible. Also from the village of Kirumba, the reggae musician, known as Ngoyam’S, uses music to promote peace. “I call on people not to collaborate with the enemy,” he says, “or I invite armed groups to lay down their arms in my songs.”

By making music, which is now easier thanks to Kisuba’s workshop, Ngoyamwaka hopes to alleviate a security situation that, since 2017, has left 7,262 people dead in this region alone, according to the Kivu Security Tracker, which monitors violence in eastern DRC.

“As a musician, I feel I have a great responsibility,” Ngoyamwaka says.

Kisuba also teaches his craft; he’s now training his fifth apprentice. Equipping young people with practical skills is an efficient way to counter the challenges they experience, he says. “Music also participates in the supervision of youth.” 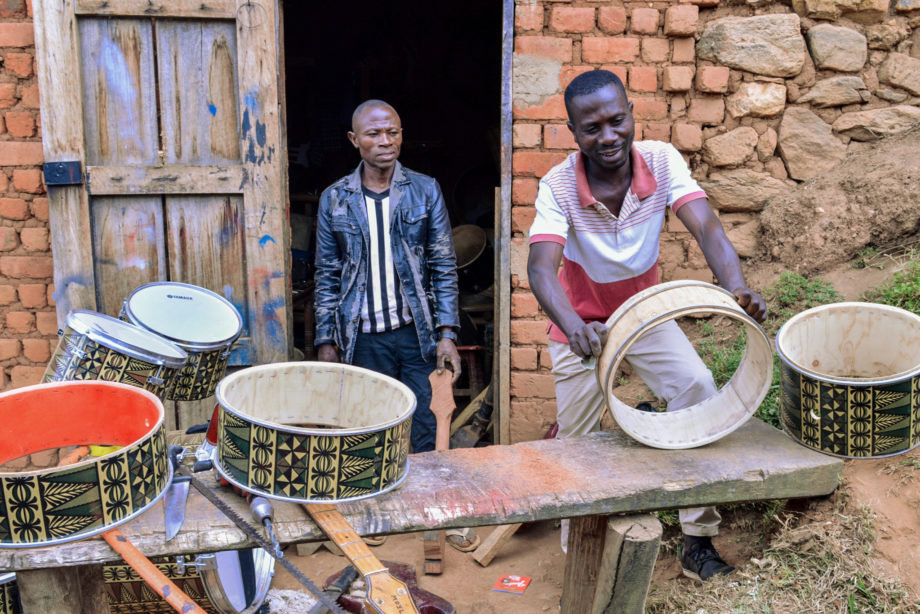 Scarce employment opportunities leave young people vulnerable to influence by armed groups, according to a report by YouthPower Learning, a research and learning platform funded by the United States Agency for International Development. Training programs like Kisuba’s offer another option.

“Before I came to this workshop to train, I was a traditional musical instrument maker,” says Egide Kasereka Kighoma, one of Kisuba’s students. “After my training, I will have to open my own workshop.”

The cultural value of the workshop hasn’t gone unnoticed, says Lambert Kasereka Mungumwa, head of the Culture and Arts Department in Kirumba. Through his department, Kisuba’s workshop received a 40% tax cut, which is not afforded to other small businesses.

Kisuba wants to set up a proper showroom eventually, but most of his customers pay in installments. The father of seven only makes enough money to meet his family’s needs and purchase materials. He acknowledges the tax cut and hopes the government will do more to recognize the workshop’s contribution to the community.

A Christian, he loves gospel music, which is popular in this region. Through music, he says, a community can change.

Merveille Kavira Luneghe is a T News Post reporter based in Kirumba, Democratic Republic of Congo.

Cracks Start to Form in an Ancient Industry

In Violent Region, Music Shop Is an Instrument of Change