INUVIL, SRI LANKA — At sunset, as her young son plays nearby and her husband has yet to return from work, Kirushna Sutharshan forages for edible plants near her home.

She bends carefully over her expanding belly — her second child is due in August — but ignores the discomfort. The prices of milk, eggs, spinach and other foods recommended for healthy pregnancies have tripled since January; the once-free iron supplements are no longer available at prenatal checkups at public hospitals; and she cannot afford vitamins at private pharmacies. Even Thriposha, a corn-based nutritional supplement usually distributed to pregnant women for free, is no longer available.

“What can I do?” Sutharshan says, adding that her doctor has warned her that her iron levels are too low. “In the current situation, I cannot afford to buy iron-rich spinach from the market.”

Sri Lanka has worked hard to improve its maternal and infant mortality rates, through advancements in sanitation and health care access. In 1950, a year before free health care was nationalized, 10% of newborns didn’t survive past their first birthday; in 2020, the first-birthday survival rate had reached 99%. But as the country dives deeper into economic turmoil — with the president agreeing to resign, according to a statement by Parliament’s speaker, after thousands of protesters stormed his home — public health experts warn that these gains will be reversed. Foods, vitamins, medicines and medical supplies needed for safe, healthy pregnancies have become unaffordable and inaccessible.

In June, the United Nations Children’s Fund, known as UNICEF, issued a $25.3 million fundraising appeal for Sri Lanka, including funding to provide 122,000 pregnant mothers with cash or voucher assistance. “All essential health services have been severely impacted by critical shortages of medicine,” according to a UNICEF statement. There are ongoing stockouts of essential medicines affecting pregnant and lactating women and children, which are likely to continue for several months.”

Murali Vallipuranathan, a Colombo-based community physician, confirms that imported medications and equipment for cesarean sections and other fetal and neonatal surgeries have become more expensive and difficult to procure. Due to power outages, pharmaceuticals that require refrigeration end up having to be thrown away, he adds.

Physicians, nurses and health associations are campaigning for more attention to the growing crisis, including circulating a list of supply donations requested by the Sri Lanka Medical Association.

Balasubramaniam Manikandan, a Jaffna pharmacy owner, says business has slowed as the prices for vitamins recommended for pregnant women, including folic acid, vitamin C, iron tablets and calcium, have skyrocketed. Black market sellers are also buying and hoarding the supplies, then selling them at even higher prices, he complains. 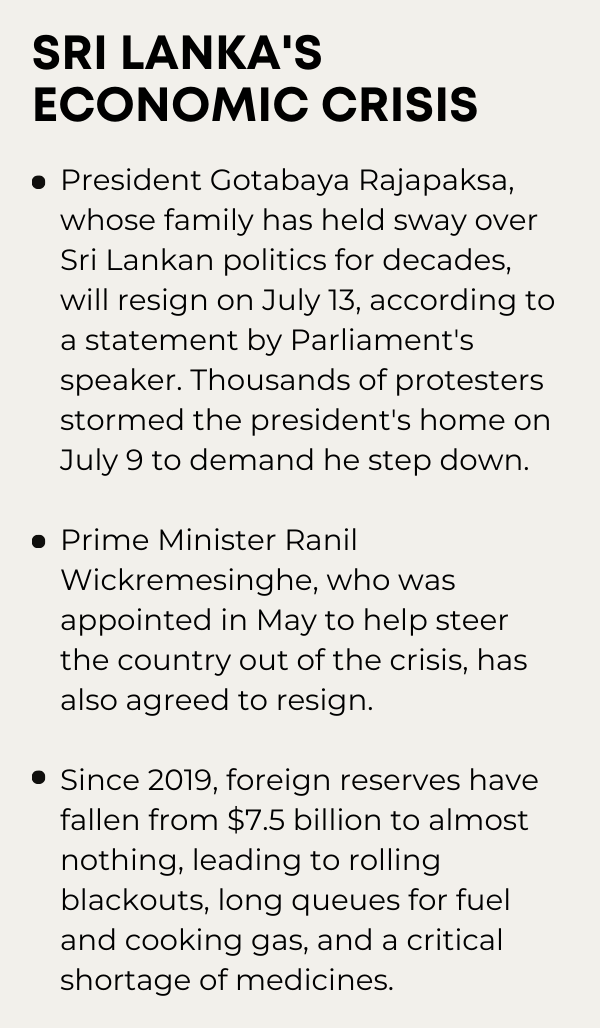 “Because of the economic condition of the nation, some medicines are not at all available. There is a general shortage of medicines for people from all walks of life, including pregnant women, diabetics, cancer patients and children,” he says, adding that he has gone from restocking his shelves twice a month to once a month.

In May, Japan donated $1.5 million, through UNICEF, in medicine for Sri Lankans, including 53,000 pregnant women and nearly 122,000 children in immediate need. Since then, pledges of aid and loans have also come in from Australia, China, India, the Asian Development Bank, the International Fund for Agricultural Development and the World Bank.

Sri Lanka’s annual drug purchasing costs are $268 million, says Keheliya Rambukwella, the minister of health. The country’s existing stockpile and the anticipated foreign aid should be enough to last until 2024, he says, but “we will have a tough time until August,” and the “priority now is to make all medicines available to the people rather than affordable prices.”

Dr. Asela Gunawardena, director general of the Ministry of Health, says discussions are also ongoing with the World Food Programme and UNICEF to provide corn, so the country can produce more Thriposha for pregnant women.

“It’s a common saying that ‘we want to taste the fruit before planting the tree,’” he says. “We need to create large-scale farms, plantations and large-scale business ventures.”

Malnutrition is also a growing concern. A UNICEF survey in Sri Lanka in 2021 found that 43% of families were eating less than before the coronavirus pandemic, and that nearly 80% of families who qualified for therapeutic food aid for severely malnourished children hadn’t received the aid for over two months.

To combat these challenges, the former minister of finance, in his 2022 budget speech, expanded a nutrition voucher program for pregnant and lactating mothers from 10 months of aid to 24 months of aid. But as the economic crisis has persisted, this plan has not come to fruition, and the existing program has been suspended. 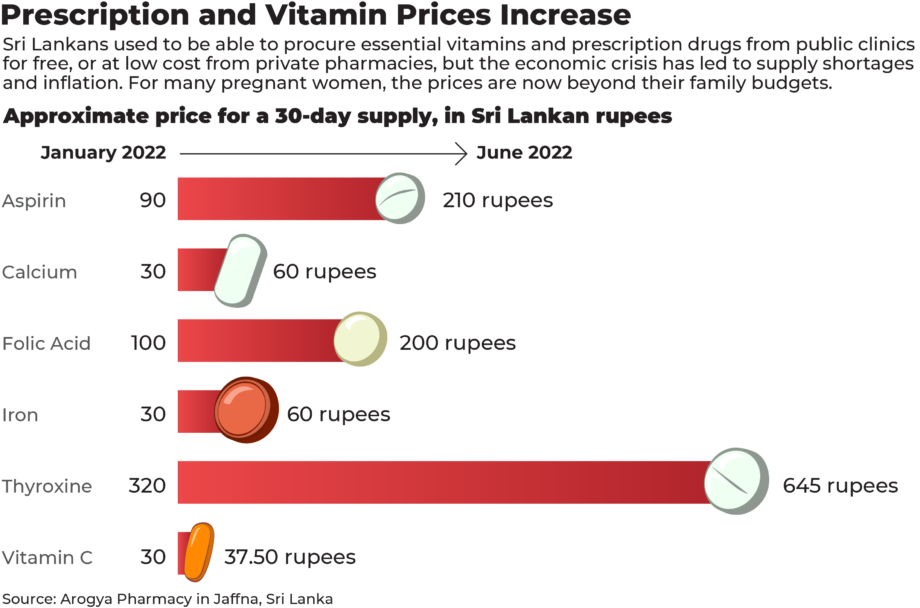 More than 80% of households are eating cheaper foods or limiting portion sizes, fueling higher rates of malnutrition, according to a joint survey by the World Food Programme and Sri Lanka’s Department of National Planning.

Vallipuranathan says he has observed more signs of malnutrition among pregnant women, as they prioritize feeding their husbands and children over themselves. He worries that the economic crisis will exacerbate the fact that 1 in 7 women in Sri Lanka is already reported to be malnourished during pregnancy and 1 in 8 children will be born with malnutrition, according to 2021 data from the Ministry of Health.

“What we are seeing now is just the beginning, and if this situation continues, the health sector could get worse. The next biggest problem we would face is malnutrition,” Vallipuranathan says. “This economic crisis may further affect middle-income pregnant women in the future.”

One such woman, Tharsini Ariharan, 36, a preschool teacher from Inuvil, and her husband, a management assistant at the state timber corporation, are expecting their third child this month. They have been spending her entire monthly income, 10,000 Sri Lankan rupees ($27.86), on the medicine and supplies she needs, she says.

“Currently, I have diabetes and high blood pressure during pregnancy, so I can see the expenses outweighing the income,” she says. 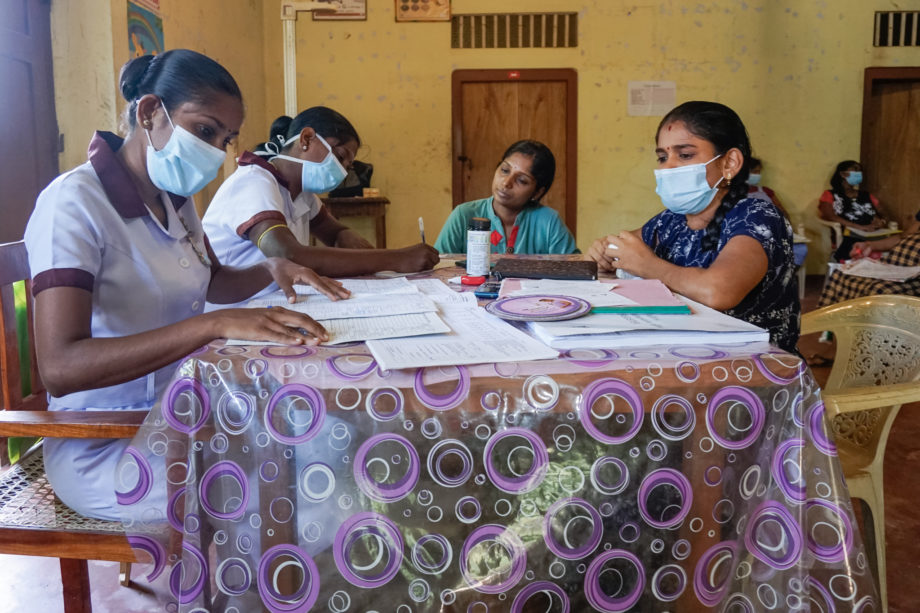 Midwives write prescriptions for pregnant women at Primary Medical Care Unit in Jaffna, Sri Lanka. Medications and nutritional supplements that were once free at government clinics can now only be purchased at private pharmacies — or not at all.

At her last prenatal checkup, her fetus was underweight and she was advised to eat more grains. These types of foods are expensive, but Ariharan says she is trying to budget for small quantities.

For Sutharshan’s family, the 2015 government program that provides pregnant women 2,000 rupees ($5.58) per month in food assistance for 10 months had been a lifeline. But due to inflation, she was getting fewer food products for the same amount during her second trimester — and since entering her third trimester, the program has been suspended.

“I do not know whether to buy things needed for me or for my elder son or the food products needed to prepare the daily food,” she says tearfully.

Her husband can’t find more work, and her iron deficiency is not improving. Fuel shortages have also made transportation difficult, so they have decided to move in with her parents to combine resources for the sake of their child and his new sibling — due in a matter of weeks.

“I’m with my parents now,” she says, “and they are feeding my family.”

Vijayatharsiny Thinesh is a T News Post reporter based in Jaffna, Sri Lanka.

Bakeries Shutter as War in Ukraine Drives Up Wheat Prices

How the Pandemic Forced Patients Off Their Medication